Below is the history surrounding our stately home Ormiston House. We are lucky to have copies of many early photographs that bring much of this home to life today; please enjoy.

The History of Ormiston House

John Henderson Henry was born on 11th March 1807, he married Christina Henderson of Whalsay on 15th February 1827. They had 10 children by the time of emigration to Australia, the youngest of which was Frederick Ormiston Henry.

Below is John Henderson Henry's house in Lerwick UK, at the right with the railing. 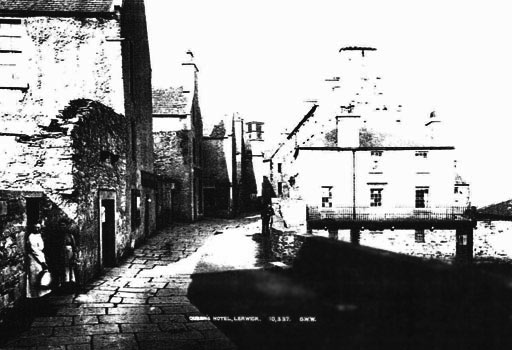 On the right here is an early portrait of Christina Henry.

The photo above is the street in Lerwick where the Henry family lived. The following description is taken from an account of Lerwick during 1867-1917 by Thomas Manson:-

"To the south of Hay's Lodberrie was Murray's Hol and Murray's Lodberrie, so named after Jock Murray, a joiner who had his workshop there. Half of the arch of Murray's Hol, built up long ago, can still be seen. The two Lodberries' and the Hol are now practically formed into one premises, at the back of the Queens' Hotel. To the south of Murray's Lodberrie stands a house erected 70 or 80 years ago ( 1845-6 ) by the father of the Hon. John Henry of Tasmania, having its entrance from a balcony overlooking Bain's Beach. This house now forms the southern part of the Queens Hotel."

John was the elder brother of F. O. Henry and John became a prominent Tasmanian politician, the first Treasurer for Tasmania following Federation.

The Hon. John Henry of Devonport (see portrait on the right)

Frederick Ormiston Henry arrived on the West Coast of Tasmania with just 100 pounds in his pocket. Within ten years he had become one of the wealthiest men in Tasmania.

F. O. examined the treacherous anchorage at Trial Harbour near Zeehan and was not impressed with it's exposed and dangerous nature. He thought that the sheltered waters of Macquarie Harbour would serve the purpose much more effectively and set about establishing his trading store at an area now known as Smith's Cove. This was to be the start of the town of Strahan and is referred to nowadays as 'Old Strahan'. His first premise was a tent, which was quickly replaced by a timber shack. The fledgling township grew up around his store and he began trading with the miners, prospectors and new townsfolk. 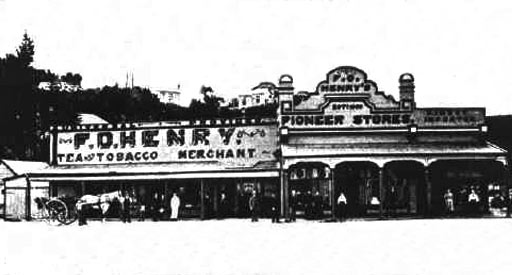 He had stores in all of the mining towns on the West Coast. He acquired 2,067 £1 shares in the Mt Lyell mine and sold them in 1897 for £16-10s per share. A tidy sum indeed for those days. He then set about to build the grandest mansion on the West Coast and one of the finest examples of federation architecture in Australia. 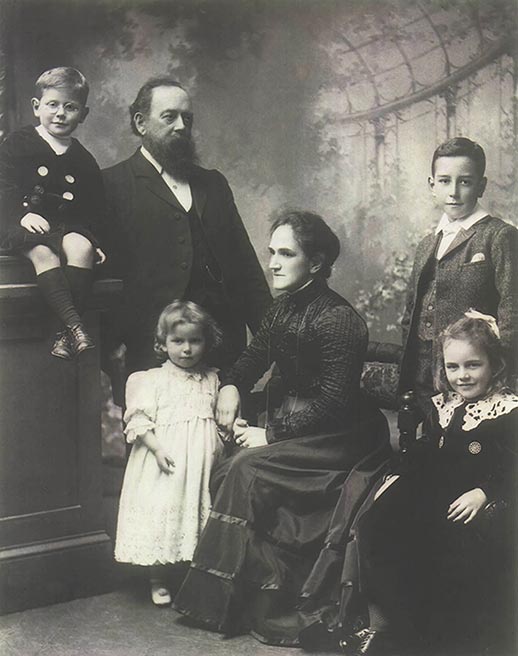 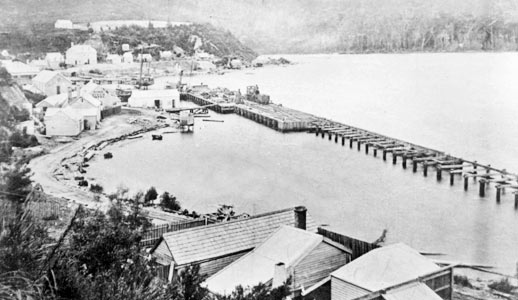 In the early pioneer days Strahan was a hub of activity, above is a photo of the wharf area during reclamation to build it. 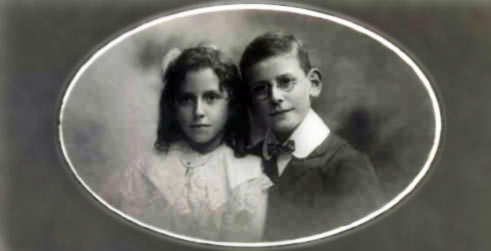 Here is a photo of Jessie & Harry Lyell C1910 as children.

The Great War was to play a role in the shaping of the family.

Harry Lyell was one of the many casualties of the great war. He joined the AIF 16th October 1916 aged 19 years and 2 months. On 6th December 1916 he embarked on the Orsova at Melbourne bound for England with the 40th Battalion. On 7th March 1917 he commenced training at Sutton Mandeville followed by Camp Durrington. Harry and 40th Battalion departed Southampton for France on 23rd July 1917 and marched into Havre on the 2nd August 1917. From Havre they were dispatched to the field on 17th August 1917. From 21st August Harry was hospitalised with defective vision and scabies and rejoined his unit on 21st September 1917.

On 4th October 1917 Pte. 2821 Harry Lyell Henry was killed in action aged 20. In a letter from Anglesea Barracks, Hobart in May 1918 it was stated that Harry Lyell was killed in action at Broodseinde, in the neighbourhood of Passchendaele, and in view of the heavy shell fire to which this sector was subjected it is presumed the original surface markings of his grave were obliterated. Failing the ultimate recovery and identification of the late soldiers remains, his name will be added to the list of AIF missing personnel to be commemorated on the memorial now in course of erection at Menin Gate, Ypres.

More information is available by viewing this PDF document: Passchendaele

Following the sale of his Mt Lyell shares in 1897, Frederick Ormiston Henry set about building a fine mansion. A mansion that today is regarded as one of Australia's finest examples of Federation architecture.

Land was selected on the Esplanade at West Strahan that by the turn of the century had established itself as the beach and picnic area for the community. On the 5th of June 1899 F. O.. signed a contract with William McDonald, a builder, to build a fine home to the design of architects A & S Luttrell. The contract stated that the completion date was to be the 16th of November 1899 and that the builder was under a penalty of £5.0.0 for every week delay after that date. We believe that no penalty was paid and the house was ready for occupancy by the allocated time.

This fine stately home is virtually the same as when it was built. A sturdy structure of brick which cost the princely sum of £1310.00. In those days a sizeable amount of money and one would think that F. O. had some change left over from the sale of his shares to furnish the house in grand style.

One visitor remarked that they thought the roofline resembled the Royal Palace of Tonga. Had F. O. been influenced during his time in Fiji by the palace and modelled the tower on the palace in Tonga?

There is no doubt that the Tower and Widows Walk had a practical purpose, that being for F. O. to observe his vessels plying the harbour. The children were only to be accompanied by adults in the early days and it could have been that F. O.'s office was under the tower in the Baltic pine room in the attic. The perfect spot for writing with easy access to the tower, and perchance, a smoke and a pinch of snuff.

The exterior of the house is unique in that there are incorporations of both Victorian and Federation themes. The wrought iron lacework with squared huon pine posts. The straight roofed veranda instead of the colonial bull nose. The large bay windows, and above, the gables of durable Tasmanian timbers in the design of the rising sun.

The roof was originally galvanized sheet iron, today it is colorbond for practical purposes, but the original appearance of the house has not been changed. Even the colour schemes are as close to the original as we are able to ascertain. Strahan is protected by a Heritage Town Plan and as such all buildings of an historic nature must represent true heritage colours and themes.

It is perhaps unfortunate, but a reality of life, that so much of the original land that accompanied the house has been subdivided and sold. Originally there were over five acres of land with Ormiston House, today there are 1.4 acres and landscaping is virtually complete.

The rooms in Ormiston House have been retained, for the main part, as being sympathetic to their original use. The front rooms were all living and entertaining rooms. The library and music room are now the restaurant. F. O.'s den is now the bar and lounge.

F. O.'s bedroom is still the master bedroom and all bedrooms have been named after the original members of the Henry Family. F. O. Henry, Mary Alice, Amelia and Jessie. The restaurant is called Fredericks after the three Frederick Ormiston Henrys. The History Gallery (in the attic) is named after Harry Lyell Henry, the second son of F. O. who was tragically killed in action during the First World War.

You can experience more of the great heritage of Ormiston House & Strahan in the book - Ormiston House, where each room will be dealt with in detail as we take you through the hallowed halls of this wonderful home. A home which has a welcoming presence, as if bequeathed by it's original owners for the purpose of eternal hospitality and friendliness. 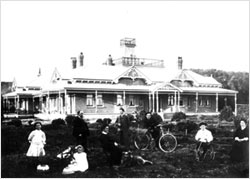 A stately old lady
Ormiston House as it was around 1905 with the Henry family in a typical pose for photography. From the left is Amelia, Jessie, F O Henry, Mary Alice, Luder Dehle, Frederick ( 2nd), Harry Lyell, Prudence Dehle (Luder's wife & sister of Mary Alice). 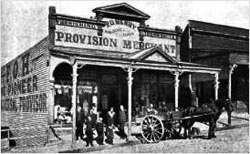 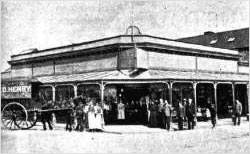 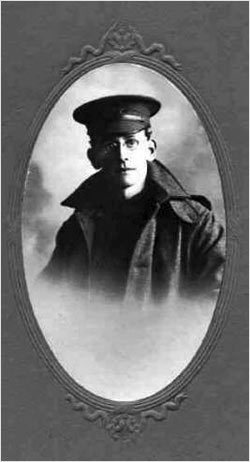 Harry Lyell
Just prior to departure for World War 1 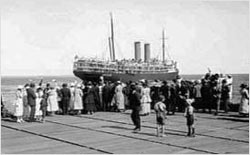 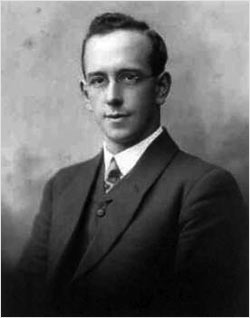 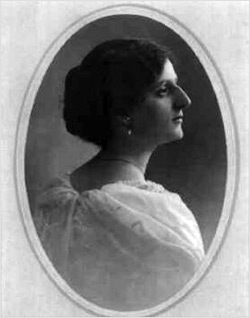 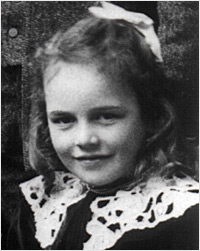 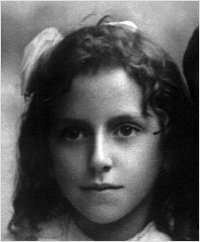